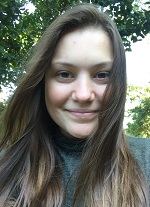 Samantha Stone began with Writopia Lab as a JLA volunteer in 2016 and has taught creative writing and essay workshops since the summer of 2017. In the Fall of 2019 she joined the administrative team part-time, helping with registration, and is delighted to work more closely with the team. Samantha is a New York City based playwright and theatre artist, who focuses on creating theatre for social change in both national and international platforms. She received finalist status for the Leah Ryan Fund For Emerging Women Writers in 2019 and for the Ivoryton Playhouse’s POWER PASSION PROSE Women Playwrights’ Initiative for 2018. Her work has been produced at the Walkerspace at Soho Rep, Primary Stages, and as part of the 20th annual New York International Fringe Festival. In 2013, she earned a B.A. in Journalism and Mass Communications from the George Washington University. She has an MFA from the Fordham/Primary Stages Playwriting program, which she earned in 2018, and currently teaches as an adjunct professor in Fordham’s English department.