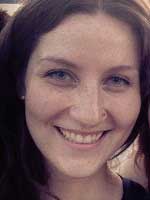 Gina Stevensen is a playwright, performer and teaching artist based in Brooklyn. Her plays have been produced in New York City and regionally and include: Book of Esther (semi-finalist: 2016 Princess Grace Award, workshop production: Binghamton's KNOW Theater), The Time Crawlers Save the World (grand prize winner: Manhattan Repertory Theater's one-act competition, space grant recipient: Looking Glass Theater) and Troll Doll's Big Day (36-hour play festival: Urban Stages). Plays in development: Cruel Sister and When You're Young You Know You'll Live Forever at Columbia University. Gina is the artistic director of Park Slope Day Camp's Cirque d'Été summer circus camp, and is the writing coordinator at Tribeca Performing Arts Center's Writers in Performance Workshop. She has traveled three times to southern India to train in Mohiniyattam, a classical Indian dance-drama form. She was the choreographer for Narcissus: An Ancient Roman Pantomime, a new opera that aired on PBS in March of 2016. She received her BFA in Drama from NYU Tisch and is an MFA Playwriting candidate at Columbia University.