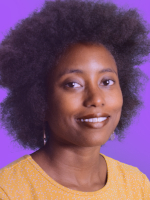 Zakiya Harris is thrilled to be an instructor at Writopia Lab, NYC! Zakiya joins us from Penguin Random House, where she worked as an assistant editor on both nonfiction and fiction books. She received her MFA in Creative Writing from The New School in 2016, where she focused on nonfiction writing and crafted personal essays revolving around topics such as identity and her childhood growing up in Connecticut, and she received her BA in English literature from the University of North Carolina-Chapel Hill in 2014. Zakiya was first published in 2006 by American Girl Magazine after winning a contest whose prompt was to write a short story based on a simple illustration, and she’s excited to encourage a love of creativity and storytelling within other young individuals. When she isn’t working on her workplace-sci-fi novel, she’s writing book reviews for The Rumpus or falling down the deep, irresistible rabbit hole that is Spotify.