This year we received more than twice as many submissions as last year and a team of theatre, TV, and film professionals read your plays! Final-round judges this year include the writers of Late Show With David Letterman, Dutch filmmaker Finbarr Wilbrink, and Karl Gajdusek, who wrote the screenplay of Hollywood blockbuster Oblivion.

Funniest Play: The Chocolate Thief by Alejandro Salas
Best Dramatic Play: tie between P.O.V. by Arjun Mazumdar and The Drill by Sierra Blanco

Before Barnaby by Leo Lion

The winning playwrights will be awarded scholarships: $1,000 for the high school winners, $500 for middle school winners, and $250 for the elementary school winners. These plays will be produced as part of our Worldwide Plays Festival, funded by David Letterman's production company, Worldwide Pants, will run May 17th through May 22nd at the Abingdon Theatre in New York City.

Second- and third-place winners will receive a free video chat session with a Writopia Lab Instructor!

The winner of the middle school drama award will be the recipient of the $500 Playscripts Scholarship, sponsored by Playscripts, Inc, an independent publisher of new plays and musicals. Playscripts, Inc. will also offer a 25% discount on all book orders to members of the Writopia community! Enter the promocode WRITE234 at checkout to use the discount.

Thanks to the support of David Letterman's production house, Worldwide Pants and the Mellam Family Foundation, Writopia Lab's Worldside Plays Festival is now in its fifth year, and is open to more writers than ever before.

The festival includes plays written in workshops at Writopia’s labs across the country and plays submitted to our competition from playwrights around the world! You’ll see comedies, musicals, monologues, historical dramas, tear jerkers, thought pieces — all written by playwrights not yet old enough to vote. 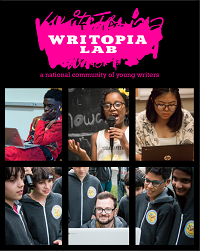