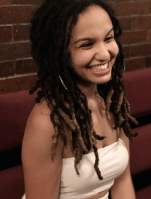 Natalie Cook is a filmmaker, poet, playwright, and educator. Natalie obtained her Master’s degree at the NYU Gallatin School of Individualized Study in Film and Africana Studies. She is an alumna of the First Wave Hip Hop Theatre Ensemble and a Gates Millennium Scholar. Natalie is also a member of the BARS Workshop at The Public Theater. Natalie was once a competing member of the Atlanta slam team that she coached from 2011-2016 (Brave New Voices), has individually won several poetry slams, and has performed at many venues around the country and across the globe. She has also opened for artists such as John Legend, Nikki Giovanni, Saul Williams, Sonia Sanchez, and MC Lyte. Since poetry had such a positive impact on her life, she founded Atlanta Word Works, a 501c3 nonprofit organization, when she was only sixteen in hopes that young people would find ways to express themselves through creative writing and spoken word poetry, just as she had. Natalie premiered MANIKIN in Madison, WI in February 2015. MANIKIN is an interdisciplinary theatre production that explores gender relations between Black men and Black women living in modern day America. MANIKIN toured throughout Atlanta, GA and was also featured in the Chicago Hip Hop Theatre Festival and the NYU Gallatin Arts Festival.