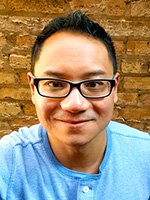 Jay (he/him/his) is thrilled to join Writopia Lab as a Los Angeles area Game Leader! He is a published role-playing game (RPG) designer who has written numerous adventures for Dungeons & Dragons’ official organized play program, the D&D Adventurers League. His work has premiered nation-wide in conventions such as Origins Game Fair, Winter Fantasy, and Los Angeles’ own Strategicon Conventions. Jay’s most recent work can be seen in the newly released Carbon Grey RPG. In addition to his design work, Jay also plays on gaming streams such as the Saving Throw Show and Geek & Sundry’s Game the Game. He recently joined Happy Jack’s RPG Podcast as a player and as a panelist for their Friday Night Advice show. When he isn’t running games, Jay enjoys visiting museums, exploring Los Angeles, and sharing life experiences with his two cool kids. Coming from a Theatre background, he uses theatricality and voice training to bring characters to life for his players. He greatly looks forward to guiding Writopia Lab's young players on their own storytelling journeys. Roll Initiative!