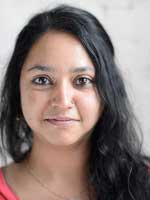 Anisha is thrilled it be a part of the Writopia DC teaching team. She is a published journalist and fiction writer who holds holds a Diploma in Screenwriting from Vancouver Film School in British Columbia, Canada and a Masters of Arts from NYU in Digital Media Design for Learning. Anisha is an accomplished writer, educator, and, producer. She recently co-produced and co-wrote a web series set in New York City. She also develops curriculum, writes in-game scripts, characters, and story bibles for educational gaming products. In her spare time, she loves reading comics and long-form fiction. She is originally from India and tries to read at least one non-English story or book a year.