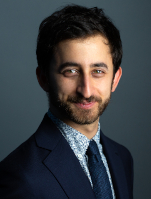 Ethan joined the Writopia Lab community as an intern in 2013. He has since been serving as a full-time creative instructor, filmmaking instructor, and program coordinator. He has also served as Writopia Lab's Media Manager since 2018. His Writopia students have been showcased as part of the Tribeca Films Festival every year since 2015! Prior to Writopia, Ethan worked as a freelance video editor and photographer. Ethan graduated from Sarah Lawrence College in May 2015 concentrating in religious philosophy, fiction, and non-fiction. During his time there, he produced and directed over a dozen plays. You can sometimes find Ethan leading Writopia’s unique Literary Yoga for Language Play workshops!