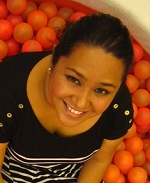 Sophia is thrilled to be joining Writopia Lab, Westchester as a Writing Instructor. Sophia is an author of books for children and young adults. Her first book, What Things Mean, is a young adult novel published by Scholastic Asia (2016). This work won the Grand Prize at the 2014 Scholastic Asian Book Awards, and is one of the first young adult stories about the Philippines to have been published by Scholastic. What Things Mean was included in the Philippine Daily Inquirer's Top 10 Books of 2016. Her second book, a children's picture book titled Soaring Saturdays, won 2nd Prize at the Samsung KidsTime Authors' Awards (2015). It was digitized into an interactive e-book app in 2016 and is set for print release by Scholastic Asia in 2018. Sophia wanted to be many things growing up: doctor, teacher, ballerina, ninja, crime-fighting international spy, wizard, time traveler, journalist, and lawyer. She likes to think she can be all these things through writing. She studied creative writing at the University of the Philippines Diliman, and is currently a Creative Writing MFA Candidate with a concentration in Writing for Children and Young Adults at The New School in New York City. You can find her online at www.sophianlee.com.