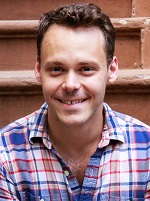 Matthew Jellison is over the moon to be serving as Senior Manager of Education at Writopia Lab. He began as a creative writing instructor in summer of 2017 and since has had the privilege of working on writing with some extraordinary kids. Matthew is playwright, actor, educator, and native New Yorker. He is the author of the play cycle, the giants. the giants, parts one and two was produced by Loft 227 in winter of 2016, and he played the character Elliot. the giants, part three has been presented at TOWN Stages, Barn Arts Collective, and Cloud City. His other plays include Who Killed Cupid? (the Claque, Signature Theater DC) and ability (workshop at The Kennedy Center). Matthew is the 2012/13 Kenan Playwriting Fellow at the Kennedy Center, an inaugural 2018 Fellow at TOWN Stages, a two-time Playwriting Fellow at the O’Neill National Playwrights Conference, an alumnus of FreshGround Pepper Playground Playgroup, an alumnus of SPACE on Ryder Farm, and a finalist for the Soho Rep Writer/Director Lab. Prior to Writopia Lab, Matthew worked with kids and teens at the education non-profit, 52nd Street Project (where he had been a kid himself growing up), Marquis Studios, the Kaufman Cultural Center, and Manhattan Theatre Club’s education department. As an actor, he has been seen at Ensemble Studio Theater, New York Theater Workshop, and others. He graduated from the acting school at the North Carolina School of the Arts.