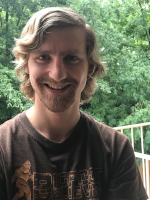 Peter Quinn-Jacobs is enthusiastic to be a Dungeon Master at Writopia Lab! He has played role-playing games since he was seven years old and has run many games both in-person and digitally for decades in a variety of fantasy and science fiction settings, using myriad systems of rules. In his free time, he designs his own board games and murder mystery parties. His science fiction has earned an honorable mention in the Writers of the Future competition (2008) and his scholarly work won the William Hamilton Prize at William & Mary Law School (2018) and was a finalist in the American Indian Law Review Competition (2018). He's excited to work with Writopia to spur the imaginations of writers and players through fantasy gaming!