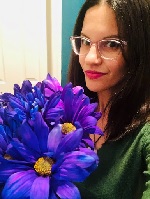 Amy Dupcak Remland is the author of Dust, Short Stories, published in 2016, and the co-editor and designer of Words After Dark: A Lyrics, Lit & Liquor Anthology, published in 2020. After studying Writing and Film History at Sarah Lawrence, she earned an MFA in Fiction from The New School. She has worked as an adjunct English professor, music and culture journalist, assistant editor, and high-school creative writing teacher. Amy has led creative and essay writing workshops, as well as private sessions, at Writopia Lab since 2012, primarily working with teens. She also works with adults at The Writer’s Rock as a fiction instructor and private mentor/editor.

Her fiction and creative nonfiction have appeared in Sonora Review, Hypertext, Fringe, Litro, Phoebe, and other literary journals. She contributed one story, two poems, and thirty-five original trivia questions to Words After Dark. In 2020, she published poems in the “How To” issue of District Lit, fall issue of The Night Heron Barks, “In Sickness and In Health” column of Pangyrus, and in Alternative Field & Avenue 50 Studio’s “In Isolation” poetry anthology. Her personal/cultural essay “How Zelda Saved Me: The Inspiration, Feminism, and Empowerment of Hyrule” was also published in Entropy. She is currently finishing a YA novel.