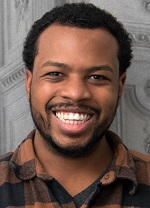 Malcolm Knowles has been part of the Writopia Lab team since 2018. He is a writer and multi-instrumentalist originally from Houston, Texas, where he learned to record and release music during his teenage years. He later attended Sarah Lawrence College with a focus in Jazz Guitar, Composition, and Radio. During the summer, Malcolm teaches Creative Writing and Songwriting at both the Writopia Full Day camp and WriCampia, and is the Division Head of Upper Boys at WriCampia. After two years of developing the Writopia Songwriting Studio and its camp electives, Malcolm co-designed, launched, and began overseeing the Writopia Music Foundry in 2021. Both programs are offered as part of Writopia's Music Lab. During the school year, Malcolm helps young and teen writers navigate the process of Essay Writing, Creative Writing, and Songwriting. When not teaching, you can often find Malcolm next to the closest musical instrument.