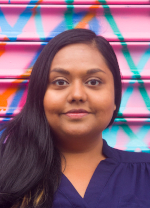 Di Jayawickrema is thrilled to be part of the Writopia Lab team! She is a Sri Lankan New Yorker who is passionate about cross-genre writing, community-building, and youth mentorship. Di has mentored youth since she herself was a teenager, and has founded and facilitated writing communities for young writers, women and non-binary writers, and writers of color throughout her adulthood. Her cross-genre writing has appeared in numerous literary journals, including wildness, Jellyfish Review, Pithead Chapel, and Entropy, and has been nominated for Best of the Net and anthologized in Best Microfiction. She received an honors degree in English Literature and Creative Writing from Binghamton University, and has been awarded fellowships from Voices of Our Nation Arts Foundation and Kundiman. She is currently on staff at the award-winning publications, The Offing and The Rumpus, and is working on a book as often as her joyous, rambunctious infant will allow her!