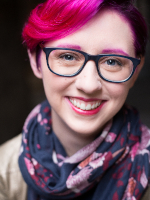 Cassandra is tickled pink to be working with Writopia Lab in LA after starting with them in Chicago! Cassandra earned her BA in Playwriting from Columbia College Chicago. Recently, she completed Upright Citizens Brigade’s sketch writing program and UCLA’s Professional Program in Writing for Television. As a playwright, she’s had over 300 of her short plays performed across the country. Her longer plays include The Amen Trilogy (developed with Chicago Dramatists), Billy to His Friends (developed with Broken Nose Theatre), and The Volunteer (developed with Stage Left Theatre). As a screenwriter, her scripts have placed in various writing competitions including the Sundance Episodic Lab and Austin Film Festival. Most recently, she became a guest writer for the scripted comedy podcast, “Starlight Radio Dreams”. She loves helping young writers with their scripts, their essays, and their creative writing in general.