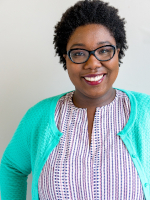 Korama Danquah started teaching workshops at Writopia Lab in 2015 and loves it! She is a playwright, screenwriter, poet, and fiction writer originally from Los Angeles, CA. After studying Theatre Arts at Brown University, she produced her first solo show, Mixtape for New Year's Eve (Secretly a Love Story) in Providence, RI. She has published multiple pieces in Coast Magazine, most recently a personal essay on cultural diversity in the ever-expanding industry of food delivery services. In 2019 she was a finalist for Skylight Theatre Company's Fresh Brews competition, and she is currently working on writing her second television pilot (while trying to sell the first). When she's not writing, she enjoys acting, karaoke, and going to the theatre!