In this op-ed, Writopia founder Rebecca Wallace-Segall shares why we must create more safe spaces for kids to write.

Writopia Lab gives kids the change to express themselves through creative writing. (Photo c/o Writopia Lab) Each week last month, I packed six laptops into a backpack and traveled to the Clason’s Point Library in the Bronx to run a free writing workshop. At first, I had only planned on coming to the first session to help set up and oversee the workshop. That was until I worked with David Garcia, a teary-eyed eight-year-old, who wrote about a boy whose home was destroyed in a hurricane, and Zania Cousins, a 13-year-old African-American girl who is saddled by three younger sisters.

Zania wrote about running free through the city streets, in love, “with no sisters no waer in site.” Neither had heard of “quotation marks”—but both had vision and voices—and a profound need to reflect and write. I changed my schedule and co-ran the workshop over the following month. 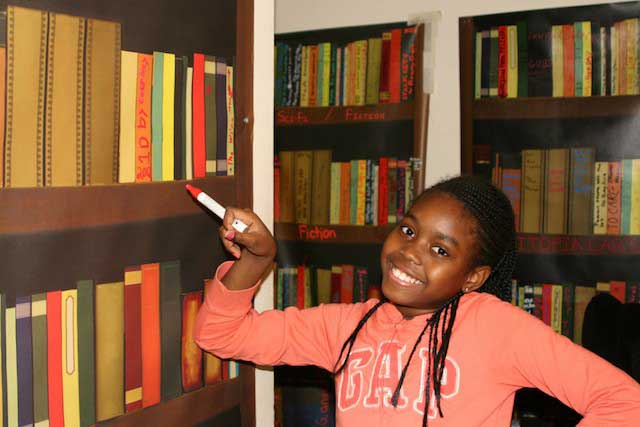 We integrated literacy support into four weeks of rampant storytelling. We laughed and cried. There was a line out the door of kids who wanted to join us. Why?

“Because we can write whatever we want,” explained Zania. There is shrinking space for kids to write—and even read—fiction and memoirs during their schooling years. Teachers are increasingly forced to teach to the tests, and students are under more pressure than ever to focus only on testable materials.

And the truth is, even when given space to write in the past, that work was for the most part heavily censored by the school or self-censored by self-protective students.

Recently, a parent of an 11-year-old child at a top public school wrote on her Facebook page: “My son is losing 11 points on a science fiction writing assignment because it involves a serial killer... Except: It's only about a serial killer in that it's about a trio of students who use their chemistry smarts to make a truth serum that gets an evil vice principal to admit that he's a serial killer... Story has no guns, no gunplay, no corpses, no killing, no details about methods of killing—just the fact that a serial killer exists.”

How nerve-wracking for a child. An allusion in his writing caused him to be penalized. In one fell swoop, this once-enthusiastic writer immediately felt discouraged and disconnected from his school community.

In all fairness, teachers are under constant surveillance by their administration, the Board of Education, and their parent body. Censorship is embraced by all because most parents and teachers become anxious by the dark corners of youth experience and by the slim chance that anything horrific should happen at their school or to their child.

But it is possible to allow youth the deep pleasure of exploring character, aspects of themselves, and human behavior within narratives even in the confines of a school.

In 2006, I ran my first in-school, uncensored workshops and the participants won more Scholastic Writing Awards that year than any other group of writers in New York City. Since 2008, Writopia writers have won more national awards than any other teens in the entire country.

The secret is simple—a safe space. Writopia is a place where silly ideas are taken seriously and where serious ideas do not cause alarm. Because authentic, inspired writing is better writing. All writers know that when we feel pride in our work, we become more enthusiastic about revision and mechanical precision.

When visitors come to Writopia, they say: I had no idea that kids could write so well. This is because no one lets them.

And, after it all, the participants reap the greatest reward: a written record, documenting exactly how they were feeling, thinking, imagining at a certain moment in their lives. Most of us do not have such a thing because censorship of youth experience is as old as the Bible. But it's more urgent than ever that we encourage kids and teens to imagine new possibilities, and to write their thoughts and reflections in the form of fictional and personal narratives.

There is a literacy crisis at hand. American tenth graders place close to the bottom among developed nations on literacy exams, according to the Alliance for Excellent Education's 2011 Policy Brief. This is alarming for the U.S. as it compromises the nation’s capacity to compete in a knowledge-based economy.

Writing is a gatekeeper to the most promising jobs. According to a College Board report, “in today’s workplace writing is a ‘threshold skill’ for hiring and promotions.”

The answer is not additional standardized tests and monotonous test prep. Finland, for example, has managed to educate their youth and avoid a test prep culture. So can we—in our own, culture-appropriate way.

When visitors come to Writopia, they say: I had no idea that kids could write so well.

This is because no one lets them.