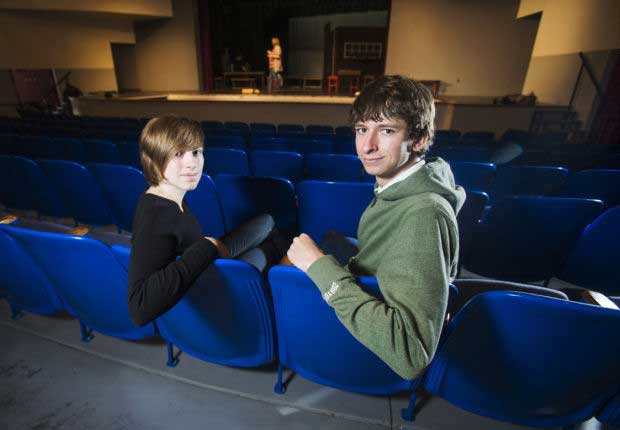 Some playwrights write a lifetime and never see their work on stage.

That s how long the St. Gregory College Preparatory School students had to collaborate on Set Back, a 10-minute comedy that has won a national competition funded by David Letterman's Worldwide Pants. It's headed to off-Broadway in May, where it will be part of the five-day Worldwide Plays Festival. This is not some low-budget reading it will be produced, designed, directed and performed by New York City-based theater professionals.

Here s a look at how it all happened:

This is the fifth year New York City-based Writopia Lab has held this contest, open to students ages 6 to 18. Writopia is a 7-year-old nonprofit that offers workshops with professionals to young, budding creative writers across the country.

"We had an instructor who said he would love to produce some of the plays students had written," said Jeremy Wallace-Segall, the organization's chief operating officer. We gave him a $2,000 budget, and in a two-day festival he produced and directed 19 plays.

"The next year," Wallace-Segall said, they were prepared to double the budget. That's when Letterman s production company stepped in, handing over $50,000 for the play competition. That amount is now up to $60,000, and the gift allows for a bang-up festival.

We get submissions from all over the country," Wallace-Segall said. "This year, we got over 400. It was wonderful."

Judges for the 2014 competition included writers for The Late Show With David Letterman, filmmaker Finbarr Wilbrink and screenwriter Karl Gajdusek.

While submissions come from students who have attended the workshops, it s open to all young writers. Chipman and Stiely have not attended any Writopia events, but their drama teacher at St. Gregory, Lisa Bodden, had received a flier in the mail and decided it would be a good project for her drama students.

It was such a shot in the dark, Bodden said. But I knew the stakes were high, and the ultimate goal was the performance in New York. We had nothing to lose by trying.

Chipman and Stiely decided to write the play despite the looming deadline, just two days away. Collaborating made sense to them.

We ve been friends since middle school, and we both write, Stiely, 18, said as she sat in St. Gregory s conference room Tuesday, Chipman at her side.

The two seem like lifelong friends they laugh easily together and sometimes finish each other's sentences. After brainstorming ideas for the play, they went their separate ways. We went on Google docs and alternated the writing back and forth, Stiely said. We would edit each other's stuff and offer ideas.

Their long friendship, and appreciation for each other's humor, fueled the story. "My humor is sarcasm, and Peter's is absurdity," Stiely explained. While she loves to write, she has no doubt that the play needed both of them to succeed.

It definitely wouldn't be so good without Peter," she said. I appreciate his humor so much.

Stiely started writing in earnest when she was in the eighth grade. Chipman started earlier than that, and has saved all his stories to prove it. "I write Tar Struck, episode-by-episode parodies of Star Trek," said Chipman, 17. He s been doing that since the fourth grade. Chipman also published a parody of fantasy fiction last year, An Epic of Novel Proportions (CreateSpace Independent Publishing Platform), which is available on Amazon.com.

Set Back took the top honor for comedy in the high school category.

"Two actors walk on stage 10 minutes before curtain and realize the entire set is missing," Chipman said. "It was a huge set."

Indeed. The script refers to a diner, apartment, factory and underwater research station, now all gone. The props are, too.

The story takes place in real time, and while reading it you can sense the actors rising panic as they realize the gravity of the situation. The only prop they can find in the theater is a case of beans. As the clock ticks away, and an audience paying $12 a ticket is about to be seated, they scramble to see how they can make the play work.

"Hey, the scene where Roberto and Alex crash the car into the recently renovated zoo? one character says. We can build the car out of the cans by stacking them. ... And when it crashes, we just knock them all down."

"We had both our email addresses on the script, but they only sent me one," said Chipman, who got the message late last week. He immediately texted Stiely with a bunch of jumbled letters that she understood to be screaming.

"I was totally confused," she said.

Realizing she was at a loss as to the reason for his excitement, he forwarded her the email notifying them of the win. "In the middle of dinner I read it and put my plate down which was a big deal for me," Stiely said.

Chipman and Stiely will go to New York City for the May staging of their play. But after that, they are headed in different directions. Chipman plans to study computer science in college. The National Merit Scholarship finalist hasn't decided where yet, but his top choice is California Institute of Technology in Pasadena.

Stiely plans to stick to writing for now and is headed to Coe College in Cedar Rapids, Iowa. The liberal arts school is known for its strong writing program.